Previous post: The Duchess of Alba third wedding: What do we know about it?

Today, at 13.00 P.M., the Duchess of Alba gets married for the third time. Her relationship with the groom, Don Alfonso Díez, has been subjected to intense scrutiny; after all, she’s Spain’s best well known Grandee, a constant in the social press, a hippie Duchess, owner of vast estates, palaces and collections of art and the groom a regular civil servant, over 20 years her junior. It should be noted, whatever the international media says, that this is not a royal wedding as none of the participants are royalty; the Duchess is a noblewoman of the most aristocratic lineage (including a bastard of James II of England as her direct ascendant), but she’s not, as many people seem to think, royal.

I’ll update the post later, with pictures and more information. For now, we have doña Cayetana’s telephone interview published on the ABC newspaper today. It took place yesterday and we learned that there are 35 guests expected at the Chapel of the Palace of Dueñas, where three priests will officiate the wedding. Her third son, the Count of Siruela, is travelling with his wife and won’t be present(understandable, days ago the Duchess unexpectadly called the Countess of Siruela <<mean, a liar and covetous>> although later Doña Cayetana backed down). Her only daughter, who was already at the Palace in Seville, has the chicken pox and is at the hospital in Madrid; the rest of her children, their spouses and former spouses are expected.

For the Duchess of Alba, getting the consent of the King was paramount(although not required by law since 1931) so last week the bride and the groom arrived at the Palace of La Zarzuela for a private audience with His Majesty, who granted his approval and hugged Don Alfonso, a very touching memory for the bride.

Sketch of the godmother's dress

Sketch of the wedding dress

The Duchess is wearing two diamond bracelets, one was a present from her godmother, Queen Victoria Eugenia, and the other from her first husband, Don Luis Martínez de Irujo. The earrings are also diamond ones.

Video of the groom leaving the hotel earlier:

The Duchess with her eldest son, the Duke of Huéscar, before the wedding ceremony

Video of the Duchess dancing after the wedding:

Doña Simoneta Gómez-Acebo y de Borbón is the only daughter of HRH the Infanta Pilar and the late Duke of Badajoz, and the eldest niece of HM the King.

Simoneta married don José Miguel Fernández Sastrón, musician and grandson of the founder of Madrid’s first department stores(Galerías Preciados) in the Cathedral of Palma de Mallorca in 1990. This was the first royal wedding since the restoration and the anticipation was felt through the island the week leading to the wedding. The 22 year old bride slept in the Royal Palace of La Almudaina the night before and walked from the Palace to the Cathedral on the arm of her father and godfather of the ceremony, don Luis Gómez-Acebo y Duque de Estrada, Duke of Badajoz and Viscount of la Torre.

TE doña Simoneta and the Duke of Badajoz

The dress, a white silk confection of Gianfranco Ferré for Christian Dior, was designed to showcase Queen María Cristina pearl and diamond tiara. It was the same tiara the Infanta Pilar used at her wedding and belonged to the Countess of Barcelona.

The King, Queen and the Infantas Elena and Cristina arrived fifeen minutes before the bride.

Their Majesties greeting the groom and his mother inside the Cathedral.

The Prince of Asturias arrived with his cousin HE don Alfonso Zurita driving his own car, a white Seat Ibiza.

HRH the Prince of Asturias

Thousands of people waited and cheered the Royal Family and the guests, who included the Prince and Princess of Preslav, Princess Béatrice of Orléans, the Duchess and Duke of Alba, the baron and baroness Thyssen and important businessmen and bankers.

The groom arrives with his mother and godmother, doña Eloísa Satrón.

HRH the Infanta Pilar, mother of the bride, arrives with her eldest son Juan

The Count and Countess of Barcelona

TRH the Prince and Princess of Preslav

Princess Béatrice of Orléans and her daughter Clotilde

After the religious ceremony, the family went to the Palace of La Almudaina for a photo session. The wedding banquet  for the 800 guests was served in the Palace of Congresos del Pueblo Español.

The bride and the groom

The Duchess and Duke of Badajoz, parents of the bride, after the wedding took place 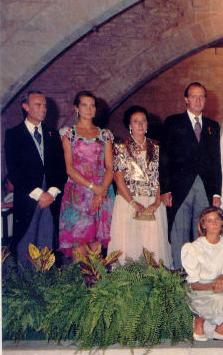 The brothers of the bride

The Duchess of Alba with her second husband

The Duchess of Alba is 85 years old, fabolously wealthy and a staple of Spain’s social life.  Thus, it wasn’t surprising when the rumours of her third wedding with a civil servant 25 years her junior began.  The problem is they’ve become so widespread it’s difficult to separate fact from fiction. That’s the mission of this post, to only state facts.

What do we know of the Duchess of Alba’s third wedding?

To view a photo gallery of the relationship between the Duchess and Alfonso Díez, click on this Hola article.

At the Spanish Court